Yesterday, The Seattle Times was humming with even more purpose and productivity than usual. Reporters argued over fractions of percentages. Editors posted dozens of news updates every hour until midnight. Fifteen boxes of pizza vanished in an hour.

That’s right, it was election day–only the most simultaneously stressful and exciting day of the year for the news media.

In the summer, I was around for the primaries and was thrilled to see the entire staff working well into the night to gather statistics, opinions, feedback and fallout from all around the state. I stayed five hours past my regular shift and dreamed of being on the team that helped produce the content on the real election day in November.

Amazingly, that dream came true. After two months away, I returned to The Times Monday to temporarily cover the nighttime police beat.

As I predicted, the “welcome back”s and “we missed you”s lasted mere minutes before I was whisked away and enlisted to help cover breaking news. Since Monday, my waking hours haven’t been boring for even a minute. The entirety of Tuesday was defined by pure euphoria and sleep deprivation.

Being part of election night at a newspaper–the hustle, the bustle, the political jokes running rampant–reminds me why I want so badly to land a career in print journalism. The things that happen here don’t happen in any other workplace, no matter how much more sophistocated or technologically advanced those workplaces may be. There’s a kind of casual give-and-take here, a special brand of slightly rude banter that actually strengthens the quality of the work, that doesn’t seem to exist anywhere else. Though I still believe there are multiple possible career paths out there for me, this particular path–insanely demanding and underpaid though it may be–is still my number one choice.

Today I pulled the night shift at The Seattle Times. On days when exciting things aren’t happening nonstop, it’s common for the reporter on the night shift to find him- or herself stationed next to the police scanner, listening for anything big. That’s me tonight.

It sounds boring, or perhaps to some it sounds depressing, listening to crimes happening in real time. But to me it’s actually fascinating. You get a glimpse into people’s lives all over the city, people who aren’t exactly having the best day–and it helps you feel what they feel. Crime reporters rarely feel empathy when they’re reporting; if they were empathetic all the time, they’d probably be emotional wrecks. But every once in a while, it’s good to sit by the scanner, keeping my normally detached self in check and allowing myself to feel emotions the victims of crimes feel.

I’m rarely emotional about the deaths, fires and car crashes I report on regularly. But as a fellow intern and I were chatting about the night shift earlier this evening, we asked a question we couldn’t answer: If something were to come up on the scanner that made us far more emotional than usual, could we in good conscience report on the incident?

More specifically, we discussed what would happen if, while we were alone in the newsroom, a victim on the scanner was someone we knew. Would it be a conflict of interest to report on the story?

What’s particularly difficult about this hypothetical issue is the time at which it happens: it’s late at night, and you’re the only one in the newsroom. All other reporters and editors have gone home. Were it during the day, you could easily pass it on to another reporter sitting near you if you felt uncomfortable covering a friend’s tragedy. But you’re alone, and someone has to cover the news. Is it too inconveniencing to ask any coworker to come in, especially considering that few Seattle Times employees live downtown, gas is expensive and there’s a lot of traffic in the city? Is it better to try your hardest to fight back the tears or nagging worry and do your job?

Please weigh in. This is something many young reporters–especially those in entry-level jobs covering the cops beat at night in small communities where everybody knows everybody else–might run up against. 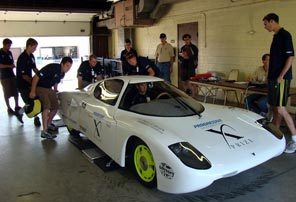 Western Washington University students work on the Viking 45, their entry in the Progressive Automotive X Prize competition. The car gets 100 miles to the gallon. Photo: Sophia McCloy.

This job is the first one in which I’ve truly been a general assignment reporter. Before that, I always had a certain beat. At the Santa Cruz Sentinel, my first internship and my first time working in a newsroom, I was supposed to cover everything but ended up mostly writing feature stories. At the Oregon Daily Emerald, I covered crime and health. At Monterey County Weekly and Palo Alto Weekly–two newspapers at which I worked simultaneously two summers ago–my clips were mostly of the arts and entertainment variety.

So when I got to the Seattle Times and in my first week alone covered four beats–science, crime, health and obituaries–I knew this internship would be an entirely different experience.

The subjects I cover have only increased since then. I’ve worked on stories about land use,  state and federal politics, the environment and education. I couldn’t be happier. I always thought beat reporting was more interesting and more rewarding, but I should have known better. Even as a kid, I loved learning–not necessarily in-depth learning about one specific subject, but instead learning a little about a lot of things. As early as high school, I waxed poetic about the benefits of a well-rounded education. In college, while so many around me believed a liberal arts education was overrated and specific technical training was more beneficial, I maintained that I had an edge over other journalism majors with my multiple interests and varied extracurriculars.

It makes sense, then, that I so enjoy general assignment reporting. I get to learn something new every day. It matters little whether I’m calling the police station for information on a shooting in a state park or whether I’m visiting sleepy, pleasant Bellingham to chase the heartwarming story of some college kids who built a car from scratch and may win $10 million for their troubles. I always walk away from my workday satisfied.