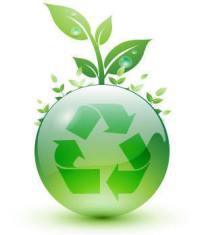 In elementary school, we learned the three phrases of sustainability–before “sustainability” was even a buzzword.

A couple of decades later, we on the West Coast don’t think of sorting our waste into three or more categories as a chore. It’s just what we do to make the world a bit greener.

And in the last decade, we’ve gotten much better at reducing our consumption and energy use, leaving as small a carbon footprint as possible.

In other words, we’ve long embraced the first two words in the mantra we learned a while back…but we’re still ruminating on that third word. Reuse.

It takes a little bit of creativity and extra thought to realize that lots of things we’ve finished using for one purpose don’t have to be thrown out–they can be reborn for another purpose.

Take food containers, for example. Old cream cheese and yogurt tubs make great Tupperware after they’re cleaned thoroughly–I’ve got a container of “strawberry yogurt” with yesterday’s dinner leftovers sitting in my refrigerator as we speak!

On my lunch break this afternoon, I walked by an apartment window ledge lined with reused pasta sauce jars. The apartment’s residents had cleaned the jars, filled them with soil and planted various herbs for cooking–basil, cilantro, thyme and oregano. Then they brushed the jar fronts with a little bit of chalkboard paint and labeled the jars with chalk–an urban inspiration!

Last week, I came across a blog where an Australian couple had created a similarly pint-sized ecosystem with cut-up milk cartons. They lopped off the carton tops, covered the rest with glued-on strips of their favorite fabrics, and stuck a dirt-filled can inside, ready to be filled with their favorite flower or herb plants.

The practice of taking something simple and seemingly useless and turning it into something fabulous, new and useful is called upcycling. At least that’s what it’s called on Etsy, Pinterest and countless blogs from creative types all over the world.

Upcycling takes a million different forms. Some people show off a project that turned an old pair of Levis into a handy denim purse. Others document their efforts to turn a horrible Coke bottlecap hoarding habit into a lovely windchime. Ever-resourceful girlfriends found that their significant others’ discarded button-down shirts made excellent pillowcases in a pinch.

While the artistic aspect of upcycling interests me greatly–mostly when it comes to ModPodged furniture–I’m most inspired by the way people in urban environments can easily and safely keep entire herb gardens inside, or just outside, their rented apartments by upcycling things they already have and would otherwise throw into their recycling bins. It demonstrates to this twentysomething urban girl that you don’t need a huge backyard equipped with a chicken coop, a compost bin and rows of handmade planter boxes to live greener.

But don’t get me wrong–someday, I hope I have a huge backyard with all those things, plus a couple of cats!

The Abacus and the Cross: The Story of the Pope Who Brought the Light of Science to the Dark Ages

Alta California: A Journey on Foot to Rediscover the Golden State

Wagnerism: Art and Politics in the Shadow of Music