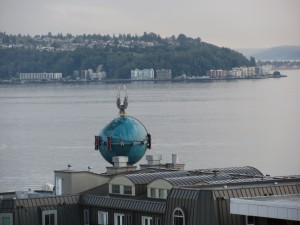 A view of Puget Sound, and the globe-topped offices of the recently-folded Seattle Post-Intelligencer, from my rooftop.

According to locals, summer in Seattle doesn’t start until July 5. Everyone sits shivering on their apartment rooftops or in folding chairs at Gas Works Park on the night of Independence Day, hoping and praying the next two months won’t be as horrible as June was–and the next day, magically, the sun comes out, as if all that collective wishing willed it to do so.

So, locals–where’s the sun? I didn’t feel much in the way of warmth today, nor did I see much sunlight. Sure, I should be used to seeing gray skies–I’ve lived in Oregon for the past four years–but before now, I always escaped the clouds come June and flew south to Santa Cruz, where perfect, breezy, 75-degree sunny weather was invariably always waiting for me.

I can’t really complain about the weather, though; even on its mundane days, this city is far more exciting than Santa Cruz has ever been. It offers more nightlife, more local color (and that’s saying a lot, because Santa Cruz, like Berkeley, is known for such a thing), more job opportunities, even–dare I say it–more stunning vistas! But wouldn’t everything be all the more exciting with sun? I think so.

Despite the rainy daytime and the chilly evening, my Fourth of July couldn’t have been better. After weeks of waiting, I finally moved into my apartment. My roomie and I celebrated at Seattle International Beer Festival, which was not only tasty but also educational. By sampling beer from all over the world, I learned all about different countries’ unique brewing styles. When my fellow Times interns and I learned that anything with a beer label bearing the words “stout” or “imperial” was guaranteed to taste great and have a higher-than-average alcohol content, we raced for the booths displaying either word–we wanted to get our money’s worth!

After the festival, we raced to my apartment building and cooked up some pasta and macaroni and cheese. Later, several other friends filtered in; by the time we formed a line out the door to head up to the roof for the fireworks, there were close to 20 people there. (And they probably felt pretty unwelcome, as all we had in the way of seating was a sofa bed and a couple of bar stools!) The fireworks, both above Lake Union and across the sound at Bainbridge Island, were pretty elaborate. I hope I can stay here long enough to see them next year sans obstructive cloud.

Tomorrow will be the start of my third week at the Times. Oh how time flies…when you can’t see the sun.